Initial situation:
One of the hallmarks of Leipzig’s old town are the numerous so-called historical “Schinkel” lamps. The cast-iron luminaire bodies, some of which are attached to the walls of the house on cantilevers or installed on individual masts, shape the cityscape.

Customer request and order:
The Senate wanted to preserve the historic luminaires by having the lamp heads professionally renovated and the technology modernized. One of the requirements was the technical conversion to LED technology with gas light optics.

The solution from BRAUN:
BRAUN is a renowned full-service provider. Approximately 360 luminaires were professionally dismantled and disassembled to their individual components. Subsequently, corroded, unsightly luminaire parts were extensively repaired and defective parts replaced. BRAUN provided technical services such as sandblasting, tooling, and painting work as well as final assembly in-house, which gave the customer an immense cost and time savings.

In the upper roof area, the old plastic cover was replaced by a new translucent cover. Finally, each luminaire was fitted with completely new glazing (ESG safety glass). Each of the 360 luminaires was equipped with an energy-efficient LED-His.lux® installation kit with GasLight optics. In addition, at the customer’s request, an additional LED skylight was installed in the roof area of ​​the lights, which creates the appearance of reflective gas light. An integrated control unit enables dimming and night shutdown or reduction.

The city center shines in a warm white light reminiscent of the historic gas lighting. With its decision in favor of LED technology, the City of Leipzig made a significant contribution to energy savings. At the same time, it helped to achieve the ambitious climate protection targets. Compared to the previous lighting technology, the current technology allows for over 50 percent less CO2 is emitted. 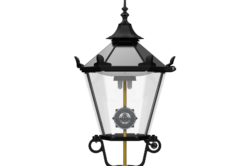 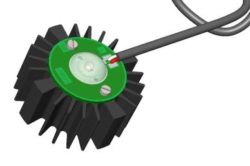